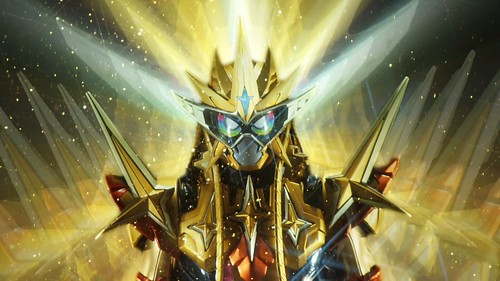 Genm Corp. announces a new addition to Kamen Rider Chronicle, a mission to defeat Cronus and harness his power, and despite knowing what dangers lie ahead, countless new players join the game! Meanwhile, Emu is still reminded of the message Kiriya said to him before Masamune took him away as Kuroto completes an invincible golden Gashat holding an unbelievable amount of hidden power! 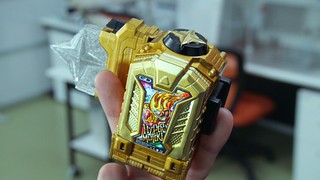 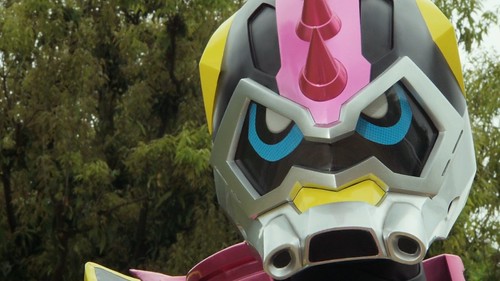 Apparently Hiiro wasn’t the only accomplice that Masamune had in the palm of his hand! Cronus suddenly summons Kamen Rider Lazer Turbo Level 0 into the fight! In order to further expand the presence of Kamen Rider Chronicle around the world, Lazer Turbo stands before the Doctor Riders in an attempt to keep them from ending the game! Much to the shock of everyone, Kamen Rider Lazer Turbo finally reveals his identity… 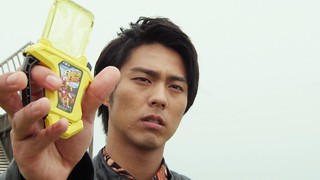 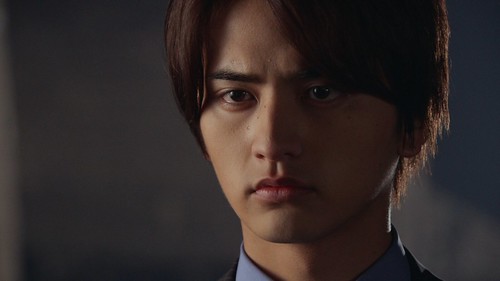 Hiiro’s betrayal weights heavily on the members of CR, but they know that if he’s working for Masamune, there can be only one reason. Parad and Graphite show up with a plan to use Gamedeus to defeat Cronus, while Emu is forced onto an emergency call where he comes face to face with Hiiro… 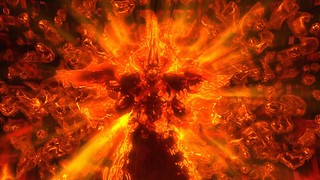 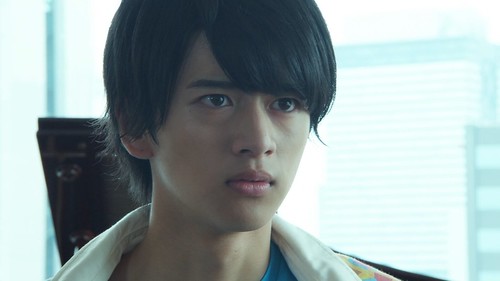 After Dan Masamune harnesses Kamen Rider Chronicle to become Kamen Rider Cronus and eliminates Lovlica, the remaining Bugsters and CR’s Riders are stunned. Along with Cronus’ power to stop time, he seems to have stolen the Proto Gashats, depriving the Riders of the data of those who were deleted, forcing Emu to visit Masamune directly… 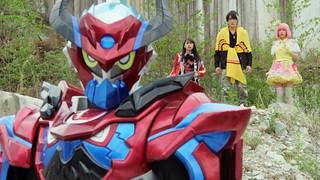 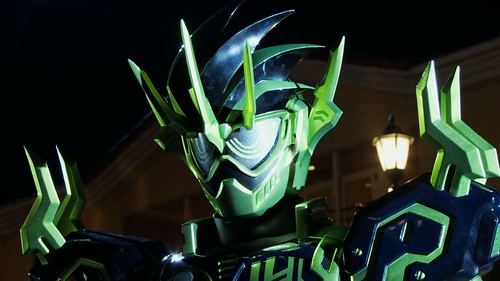 Episode 32: Judgment Has Been Passed!

Having collected the lower-tier Gashatrophies, Ex-Aid and the others challenge the advanced Bugsters in order to clear Kamen Rider Chronicle. The three advanced Bugsters are Parad, Graphite, and Lovelica. The time of the final battle against the four Kamen Riders is at hand! At last, the curtain rises on the scene of the last battle! However, a disturbing darkness suddenly begins to appear… 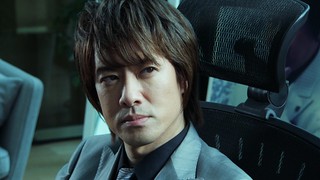 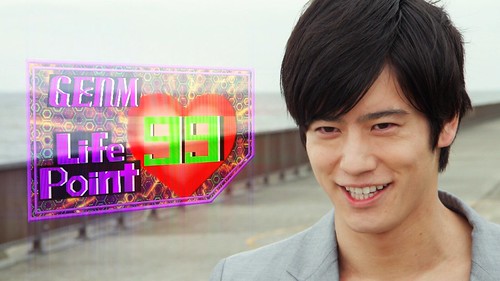 No one can hide the fact that they are upset about Kuroto’s revival. How was he able to return? What is Kuroto’s true intention by making this Continue a reality? Meanwhile, Emu cannot forgive Kuroto, but he realizes that in order to eliminate Kamen Rider Chronicle, his cooperation is required… 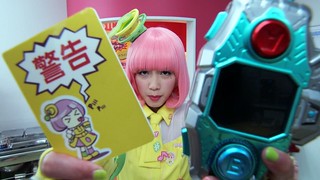 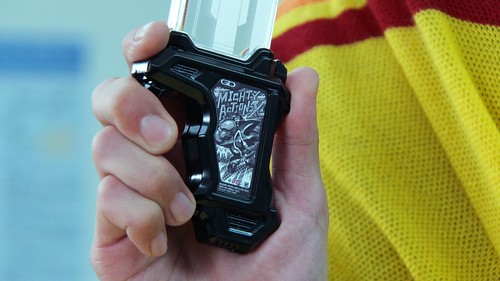 Ex-Aid, Brave, and Snipe have all been defeated at the hands of Kamen Rider Para-DX Level 99! Much to the other Rider’s surprise, Poppy brings out a black Proto Mighty Action X Gashat and a Gamer Driver! Poppy found them thanks to her revived memories of a young Kuroto, as she seeks to use the power of Level 0, in the hopes of bringing Emu back to normal… 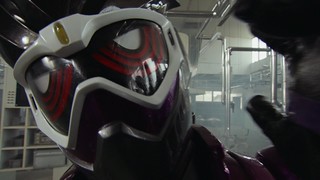 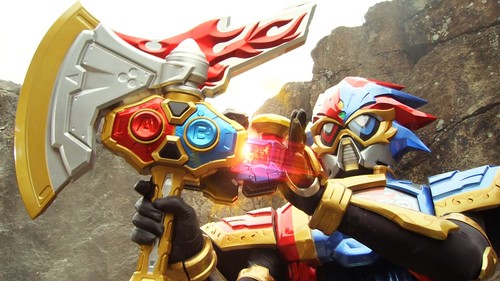 Emu managed to return Poppy to normal thanks to the bond they share, but suddenly, Parad begins to manipulate Emu! Finally, the points connecting Emu and Parado are beginning to reveal themselves as Emu and the others discover the origin of Genius Gamer M! 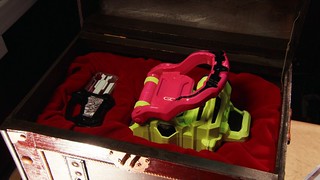 Good news, we’re back with more Ex-Aid! These continue the episodes from Box 3, which were delayed due to some assorted health issues I was facing. Box 4 is already encoded and most of the subs done, so we’ll roll right from Box 3 to Box 4 and finish up the series over the next week. Enjoy! 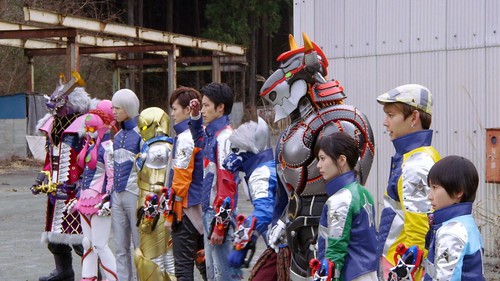 Ikagen has stolen the Puppis Kyu Globe from the Kyurangers! The Kyurangers fight to get it back, but cannot surpass Ikagen’s tricky ability designed to avoid their attacks! Xiao comes up with an interesting hypothesis that could explain Ikagen’s chain of attacks, but Lucky refuses thanks to his recent run of bad luck… 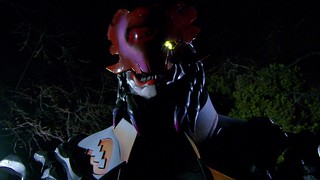 Normally, this is where I’d say that’s it for Box 1 and we’ll be back with more in a few months, but thanks to all the delays, Box 2 shipped already and we should be getting the files to encode from Howling_Snail in the next week or thereabouts, so instead, I’ll just say, sit tight for more Kyuranger in about a week and a half or so! 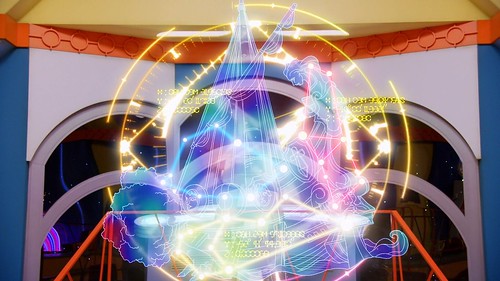 Space 11: Three Kyu Globes to Save the Universe

Now that the Kyurangers have surpassed 10 members, Xiao has instructed them to search for 3 specific Kyu Globes. Their mission is to reconstruct the legendary ship Argo, and the 3 Kyu Globes to do so must be gathered at all costs! However, Lucky, who was chosen to lead the team this time, has a serious problem. It seems that his luck is starting to run out! 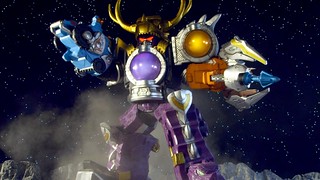