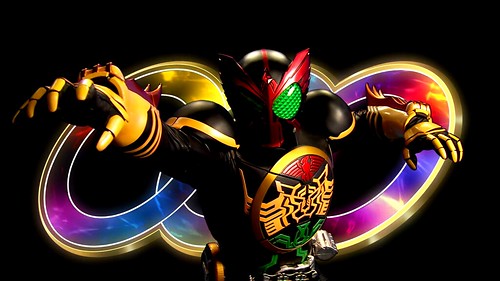 Another Rider down, but still plenty to go!

OOO is complete at last, and it didn’t take as long as W did, so that’s a big plus. This was actually the first time I’d watched every episode of OOO in order as I’d skipped some of the middle parts in the past. While W still holds as my favorite Rider, I have to say OOO was certainly a solid followup to come right after it.

Since I did a wrap up post for W to detail what’s next, I figured I’d keep that trend going with OOO as well. Unlike W, OOO doesn’t have any post-series movies other than the annual teamup with the next Rider and a few assorted appearances in other movies, but with no major starring roles and the BDs lacking any Hyper Battle Video or anything of that sort (did OOO even have one? I have no idea), this is about it for Eiji and company. I am hoping to be able to do the 3D version of OOO Wonderful in the future, pending availability of the source.

A batch will be coming soon, but I need to check as I think I may patch a couple of the early episodes to fix some minor sub gaffes I missed (mostly episode titles during the previews). The batch will probably go up by next weekend, assuming the seedbox is working properly by then.

Unlike last time, where we announced OOO once W was over, many of you that follow the site or our Twitter know that I purchased both the Fourze and Wizard BD boxes several months ago. While W, OOO, Gaim, and several of the earlier Heisei Rider shows have been uploaded to various torrent sites, Fourze and Wizard were and still are M.I.A., but since I have the BDs we need, Fourze is up next! Fourze was my first Rider series, so it holds a sentimental spot with me and I’m looking forward to revisiting it.

I’ve also been considering juggling Gaim at the same time as I’ve heard a fair bit of demand for BD versions of it. I haven’t settled on doing that yet, but it’s looking more and more probable. Let me know in the comments if you want to see me start it sooner. (and yes Akibaranger fans, I’ll be finishing Season 1 soon!)

Lastly, before I start on Fourze, which will probably kick off in the next week or so, if anyone knows of any particular things that I should look at to fix with regards to the subs, please let me know in the comments. We’ll use the Over-Time subs for sure, but if there is demand, I’ll also include the Aesir subs as an alternate option, so let me know what you want to see!

That about does it for this post so watch for Fourze soon! IT’S SPACE TIME! 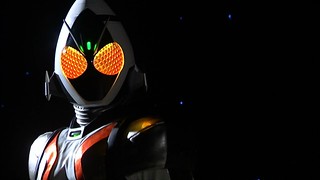