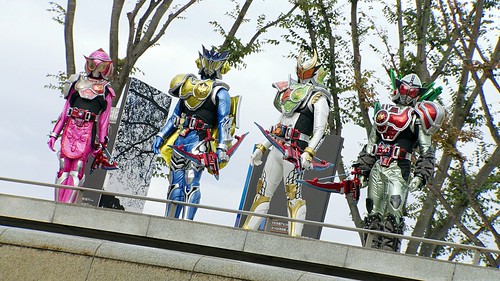 After getting a lot of really helpful feedback from the discussion post, I’m just about set on what we’re going to be changing for the revised track for Gaim. This post will mostly serve as an archive of what is getting changed and will be moved to a static page once the show starts releasing. For now, I wanted to post this as a normal post so that it’s easy to find.

To start, after a request in the feedback post, I’m going to list all the planned releases we’re going to do at this point. As I’ve said before, the intention is to create a set of unified subs using the revised track so that there will be a consistent set of translations across everything. So, the plan is to release:

On to the various changes, I’m going to list these in groups of terms unchanged, terms changing on both tracks, and terms only being changed on the revised track. Some of these were not brought up in the discussion post as they were asked about after the fact or decisions I made just recently and I’m listing them here for completion’s sake.

That about does it for the changes I’ve decided on for now. There may be additional changes later as things come up that I haven’t decided on or have forgotten, at which point this list will be revised. Feel free to comment on the changes but these are what we’re going with so they’re basically locked in. However, if there are additional changes that haven’t been addressed here, go ahead and bring them up in the comments.