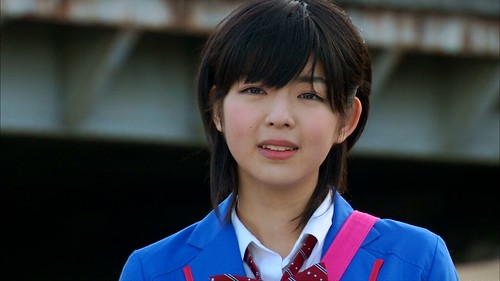 The Kamen Rider Club must work to stop the Libra and Leo Zodiarts from destroying the last two altars in Kyoto that are regulating The Hole’s Cosmic Energy. In the process, Kengo finally learns the circumstances of his father’s death. 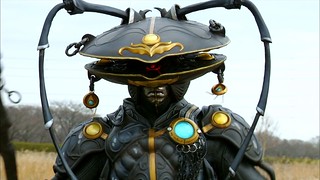 Starting with this episode, as a bit of a comedy bonus, we’re including the English dub of the series as alternate audio track. These were captured from a streaming site out of Singapore (Toggle.sg), and have been synced to the Blu-ray. There is also a signs track for the OP, titles, and other signs taken from the Over-Time track, plus I’ve added the fades where the commercial breaks were inserted into the dub version. The audio fades early during these breaks, but that’s how the streams had it, so there wasn’t much to do to correct that, but the softsubbed fades should make it a little less distracting.

One interesting thing to note is that the dub appears to have used the Over-Time script as their translation, as nearly everything is a line-for-line match, with the most obvious exception of “transform” being changed back to “henshin” (or “hensheen” as they pronounce it).

I’ve added tracksets to this episode to help make switching the subtitles and audio a little faster. I’ve used these for several years on my anime releases to pair up the appropriate audio and sub tracks. To my knowledge, this feature is still exclusive to Haali’s splitter, but hopefully it adds a little bit of extra convenience. Enjoy!