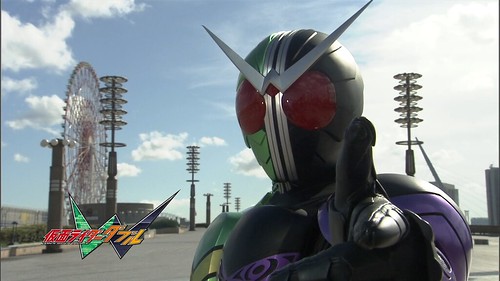 As far as I can recall, and I’ll have to double check this, W Returns: Eternal doesn’t directly tie into the other two in any way, meaning we can release that whenever, so that will probably be the next W release we do unless I’m wrong on the timeline. However, W Returns: Accel follows up from the events of Movie War Core, so before we release Accel, we’ll want to release Movie War Core.

Unlike Movie War 2010, where we released it despite not having released anything related to Decade, which partly had to do with there not being BD sources for Decade, we have BDs for Kamen Rider OOO. So, it’s time to officially announce (and it was hinted at a bit by the 2nd picture in the W Episode 47 post) that we will be continuing forward with our Kamen Rider Blu-ray encodes with OOO!

As you can probably guess, we’ll be using the Over-Time subs for OOO, and you can expect those releases to be similar to how we’ve handled W, with two episodes at a time, covering each two-part arc.

Now, I know some people have asked me on IRC about a batch release for W. We will be compiling the whole thing into a batch soon. While there are a few tweaks that I thought about making that I had missed in my check of later episodes (such as early episodes using the spelling “Nazca” rather than the correct one “Nasca”), I don’t think anything is serious enough to warrant v2s. In the future, if and when Over-Time revisits the W translations, we’ll swap the subs out then.

We’ll probably batch the movies together as a separate batch once all of them are done as well.

We also have a few more things planned to be released soon, but for now, we’ll leave it with the OOO announcement, so be sure to look for that coming very soon!

I want to end with a quick note thanking everyone who has supported us with these releases. I’m very much aware that our anime releases are very contentious due to my choices in filtering, so I’m grateful that people have given these releases a chance and hopefully come away satisfied. I’d also like to thank all of the crew at Over-Time (and of course, any former staff that were involved during the W-Time days) for their work on W in the first place, which enabled us to even have subs to put on these. Last, I’d like to thank the various uploaders that generously provided the BD sources, which made the whole thing possible in the first place.