Another short series/season, so time for another wrap up already!

Just a few days over the one year mark since we finished up Season 1, Amazons Season 2 is done, and just in time for the release of the movie in May. Of course, we won’t get to see the movie until late summer/early fall, assuming Toei sticks to their usual schedule for Spring movies hitting BD. Either way, I’ll be picking that up since there’s no point in not having the end of the Amazons story.

As usual, a batch will be out in a few days, and I don’t expect any patches will be needed. Probably no extras this time, since this season did not see a TV broadcast like Season 1, and the BDs did not include any movie promos or anything of the sort. A design gallery will go up at the same time as the batch, but like the one from the first season, the content here is very light, only having 5-6 total images.

Not much else to say other than we’ll have more Kyuranger coming soon as Box 3 was recently released and should be available to me in the next few days or so. Work will also continue on Den-O and ToQ, and of course, Build Box 1 is right around the corner, so keep an eye out for that! 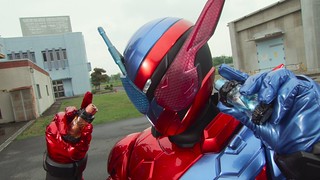